What sort of horrors do people like to watch

For our task we needed to find out what sort of horror people are buying and spending money on. To find this information out we  used sites like; http://www.metacritic.com/ and http://www.imdb.com/. These websites told us how certain horrors were rated and which ones were doing well in the box office. Using this information we can establish what kind of horror we should be making, and whether we should follow suite with the most successful horror films or branch out and try to attract a audience with a different kind of horror. We chose to use IMDB because it is an extremely popular, trusted and well reputed site. IMDB is even used by critics in reviews. From our interviews with students we showed that peoples favourite type of horror was paranormal. This type of horror was chosen as people expressed how they enjoyed paranormal because it was thrilling yet still more believable than others. The choices of the people we interviewed will influence our choice of genre as we want to appeal to a wider audience. SR TB NE JT
From our audience research we discovered that the most popular sub genres of horror were the 'Paranormal' and 'slasher' genres. we have used this research, as well as research from Imdb and Metacritic, to create a pitch for our horror opening sequence. The pitch for our horror would combine the two most popular genres to create a 'Paranormal slasher' opening sequence. The killer in our sequence would not only be a vicious, bloodthirsty killer, but also a cursed, immortal poltergeist type of ghost. This makes him similar to other iconic horror characters such as Freddy Kruger and Jason Voorhees, allowing us to take influence from the famous films the characters belong to ('Friday the 13th', 'Nightmare on Elm st')  and also appeal to a large audience and a variety of different people.
NE
The Following our pie charts from a questionnaire that we conducted, that consisted of asking our target audiences what type of horror actual frightened them. with this information we could decide upon a logical horror sub-genre, that would both entice and frighten our audience. 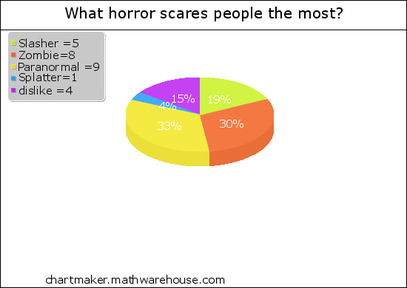