amazon and Lovefilm  Data on whose buying what horror

By viewing the top rentals from LoveFilm we found that the most rented film was The Human Centipede 2. The genre that it was tied to was torture porn. The most bought film on Amazon was World War Z, its genre is Zombie. We found that the reviewers of The Human Centipede 2 enjoyed the disturbing scenes . We would open our opening sequence with a disturbing scene as it seems to give the viewer a thrill of fear and disgust. The reviewers of World War Z on Amazon stated that they enjoyed the suspense. We would try to integrate this into our opening title sequence as the suspense keeps the viewer watching!
TB

Lovefilm review of The Human Centipede 2, the most rented film on LoveFilm 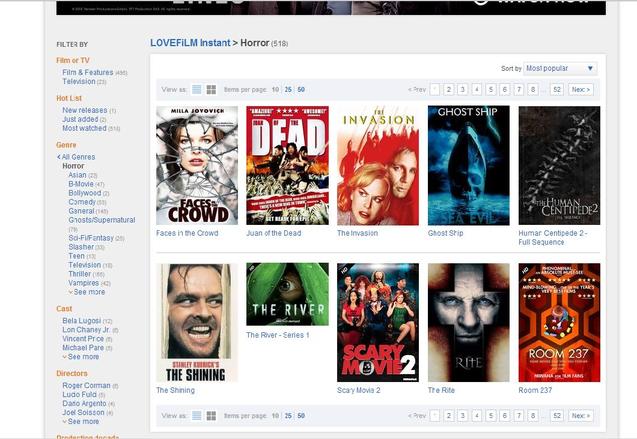 These are the top 10 Horror films on Lovefilm.com. Date taken 19th Nov.
From seeing the most popular horror films on Lovefilm we can go ahead with our choice of genre which is supernatural/slasher. This gives us confidence in our genre as the 4th and 5th top rated are a supernatural and slasher genre. This reveals to us that it is a popular type of horror as Lovefilm is a very high rated site for renting and buying films which means a lot of people in the world enjoy horror. We can conclude from looking at Lovefilm that the Supernatural and Slasher genre is a popular genre to pick to do our opening title sequence on. TB
Powered by